After reading a comparison made by Whisperingcat were they decided to compare the resolution and detail of the SD14 to the Kodak 14nx, not just by looking at the pictures on screen but rather as prints. There conclusions are pretty interesting and since I am a SD14 owner my self and use it professionally I decided to do a similar test my self. So I set out to compare pictures printed on photo paper and only looking at resolution and detail, did not look in to color, noise, fringing, AF speed or high ISO performance.

There are a few web pages were people have compared various cameras to the SD14 and in most cases have made available Raw files for people who like to verify the result. After downloading these files (not all offered raw files some only provided jpg files) I started looking at each file in Photoshop and then enlarged the Sigma files to match each camera being compared to. I used CS2 for this comparison and always enlarged the SD14 (and DP1 files were they were tested) using Bicubic Sharper in Photoshop. To make a short story shorter my results after making the Sigma files as large as the other cameras, I found that on screen at 100% resolutions (and sigma files matching in size) Canon and Nikon all showed more resolution and detail than Sigma. In all cases the difference was really apparent and everybody that saw the pictures on screen said the same, the difference was slam dunk.

BUT! When viewing the same files printed on photo quality ink jet prints the results were something completely different. All Ink jet prints were made via Epson Stylus Photo 1270 and using Epson premium glossy photo paper printed at the highest resolution.

1DmkIII vs. DP 1
The difference between the printed 1DmkIII vs. DP1 was startling. The DP1 print was far sharper and produced more detail (note: Here I only had jpg files to work with). On screen the 1DmkII showed more detail but this didn’t transfer to the print while the Sigma print showed a far more detailed and a more pleasing print. I also enlarged both files to match Super A3 paper size via Bicubic sharper in CS2 and those prints showed the same result. The Sigma dp1 was better. But you have to have in mind that the Canon had a 24-105mm zoom lens and comparing it to a prime lens of the DP1 could also be showing how good the DP1 lens really is.
And here you can see the web page were I got these files.
And here you can see another thread were I discuss this test.
Here you can download the file I used for printing 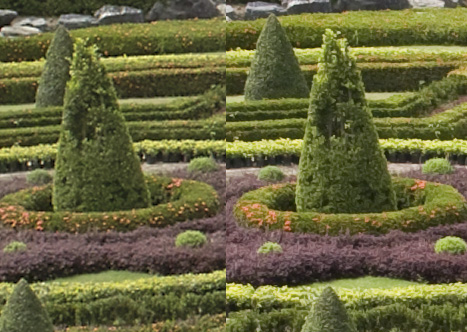 Sigma DP1 photo on the left. As you can see the Canon (1DmkIII) file on screen looks more detailed.

5D vs. DP1
When comparing 5D print to DP 1 print the difference wasn’t as startling. Up close (15-25cm) you could see the 5D print showed a bit more detail in some area, but at normal viewing distance like an arms length it was difficult to see any noticeable difference. I even could say that some detailed looked better on the DP1 print at arms length. The 5D was at native resolution and the DP1 file enlarged to match the 5D). Here I had the raw files to work with along with jpg files. The thing we have to have in mind is here we are comparing a full frame chip with a cropped one so that will maybe affect the test in some way. But the most surprising thing (for me at least) is yet to come.
Here you can see were I got these files.
Here you can download the file I used for printing

SD14 vs. Canon 50D
The next surprise came with the 50D vs. SD14. When looking at the 50D file at 100% screen resolution and comparing it to the SD14 (enlarged to the same size as the 50D via Bicubic sharper in CS2) it would be fair to say that the 50D has far more detail and resolution than the SD14 (on screen that is). Leafs are more detailed and separated as you can see online were I found these photos. After printing the files I was surprised to see very little difference looking at the print up-close and the difference became absolutely none at all when viewed at arms length. Looking at leafs I would say, at an arms length, the Sigma SD14 to have at least as much detail as the 50D if not even better. To better confirm my results I asked friends to take a blind test and point out to me which print appeared sharper or produce more detail and 13 out of 14 said the Sigma print looked like it was producing better detail. The only person which said otherwise was color blind but I don’t know how that might affect his sense of detail.
Here you can find the files I used.
Here you can download the file I used for printing

Sigma SD14 photo on the left. As you can see again the Canon 50D picture appears to be more detailed. But that doesn’t transfer to the printed picture.

Enlarging both prints beyond native resolution.
With the exception of the DP1 vs. 1DmkIII when the prints were enlarged more than the native resolution the difference between them became less apparent but in most cases I would always favor the Sigma cameras. The DP1 always outperformed the 1DmkIII

I know what you are thinking! ,,what the hell is he smoking? How can they DP1 and SD14 be so good printed compared to cameras up to 15MP?” But I kid you not everybody I showed this to came to the same conclusion.

To better verify my results I decided to go to the shops and borrow the following cameras: Nikon D3x, Canon EOS 50D and the Canon 1dsmkII. Unfortunately I couldn’t find the 1DsmkIII but tried the Nikon and canon. All pictures were taken in raw mode and at ISO 100. Have in mind this is not a scientific test, I am sure I could have control the variables better but I was not trying to see how these different cameras perform at different ISO or which has a better AF. I know very well the limitation of the Sigma camera but I believe in the advantage of the Foveon chip.

50D vs. SD14 again
I actually did two tests with the 50d. The first time I compared the 50d with the Canon 28mm F2.8 lens and the SD14 with the 28mm F 1.8 Sigma lens. In short the results were the same, the Sigma print looked far better than the 50D 15 MP picture. But I was afraid that the canon 28mm lens is not as good as the Sigma 28mm lens so I decided to do it again and now I got 50mm Sigma Macro F2.8 lenses for both the Sigma SD14 and the Canon 50D. And to make this as equal as possible I processed the raw files out of Adobe lightroom with no adjustments made other then letting lightroom enlarge the Sigma files to match the 50D resolutions. On screen, as before, the 50D was more detailed and looked more resolving. But when printed they were identical. I could see no difference between them on paper. Processing the Sigma file through SPP (Sigma photo pro) I found out that it appears that SPP makes the print a bit sharper than Adobe lightroom. I am not sure if this is because SPP is better at processing the x3f files or if it is doing a bit sharpening even if sharpness is set to 0. But even so on screen comparing the Sigma (Processed from SPP double size and then enlarged a bit in cs2 bicubic sharper to match the 50D) to the Canon showed that the 50D still resolved better detail then the Sigma. But when printed the Sigma looked far better and appeared to be a lot more detailed. So what will this mean for us? It means that the Sigma SD14 will produce AT LEAST as detailed a print as the Canon 50D (if processed via adobe lightroom).
Here you can download the file I used for printing
Canon raw file taken with the 28mm F2.8 lens
Sigma Raw file
Second test Canon raw file taken with the Sigma 50mm F2.8 Macro
Second test Sigma Raw file

Sigma SD14 vs. Nikon D3x
Here I wasn’t expecting the Sigma SD14 with the 4.6MP Foveon sensor to outperform a 24MP full frame camera but mainly I wanted to see were the limit for the current Foveon chip is. The Sigma files were processed via SPP (double size and then enlarged to match the D3x native resolutions via bicubic sharper) and compared to Nikon file processed via Adobe lightroom. The Nikon had the 50mm F1.4 lens while my Sigma had the 28mm F1.8. On screen there was a huge resolution difference. The Nikon file was just amazing on screen, with 24mp you make a print 51x34cm at 300ppi. When comparing the Nikon print to the Sigma you could at arms length see that the Nikon print was producing a more detailed print. But I could not say that the Nikon print was 81% better as the difference in Mega pixels would suggest. The difference was more like the difference between the 50D and the Sigma SD14. Up close (20cm or so) the Nikon is clearly more detailed and resolving more. But if I would have printed these files and looked at them from a normal viewing distance (the size of the prints would be 51x34cm) of say 1 meter or more I would have a problem saying which is more detailed. So my conclusion is that you need a 24MP camera to outperform a 4.6MP foveon chip (judging prints not how they look on screen).
Here you can download the file I used for printing
Nikon D3x raw file, taken with Nikon 50mm F1.4
Sigma Raw file, it is the same file as above. Taken with Sigma 28mm F1.8

Conclusion
It would have been interesting to compare to the Canon 1DsMkIII but I couldn’t find one at the time but when one is made available to me I will make another test. So as far as my work is concerned in landscape, wedding and portrait photography I am extremely happy with how the Foveon pictures are turning out when printed. To me the final performance of my work is the printed pictures and the Foveon is clearly producing prints that 15MP cameras are struggling to match. Not bad for a 4.6MP SIGMA camera.